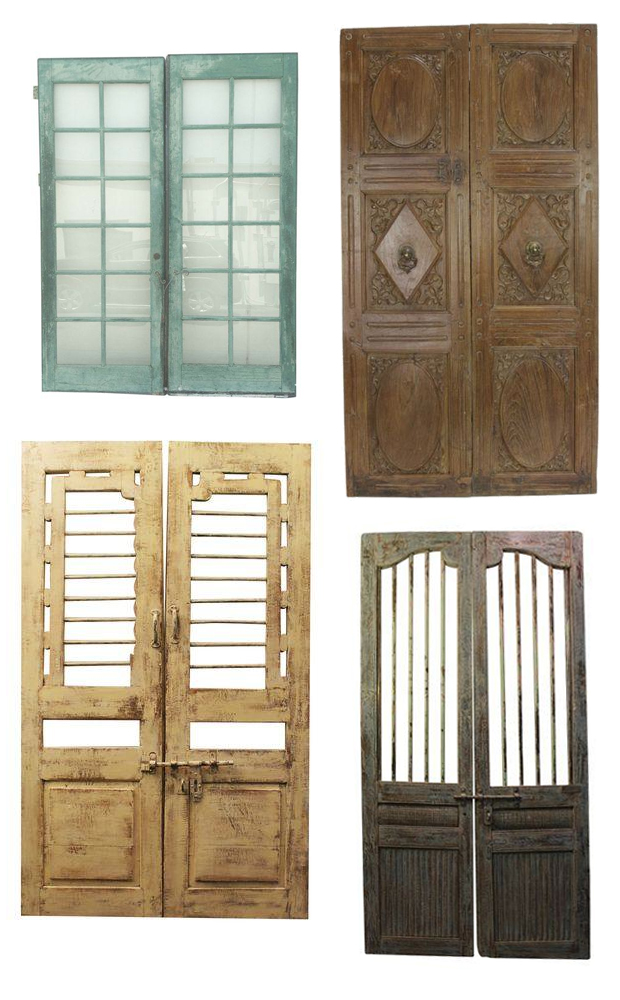 Ever since we first moved into the Jungalow By The River, I’ve dreamed of knocking out the wall in the master bedroom and putting in French doors leading out to our patio. That way I could wake up in the mornings, swing open the doors in my (non existent) silky French bath robe and listen to the birds chirp while having my morning coffee in the garden. So much better than having to walk around the the side door to get out there, right? No but seriously, you may remember, unlike the rest of our home that was built in the 20’s, our master was an addition to the home built in the 1980’s and doesn’t have the cute character and details that the rest of the Spanish-style jungalow has — so I was determined to add character (beautiful light, fun architectural details…) to that area of the house.

When our contractor let us know that we’d need our French Doors that week for installation, it happened to be the weekend leading up to the Long Beach Flea Market, probably my favorite of L.A.’s monthly markets. So I told the fam that I wanted to go the the flea to hunt for the French doors. I love the look of slightly weathered wood and old glass that is a bit thicker and glossier than new glass and I became determined to find salvaged French doors–afterall, they have so much more character than the new ones. I also had this idea in my head that we could save some money because French Doors run around $1000 at most home improvement stores.

We wandered through the isles with laser focus and it was actually Jason who spotted these gorgeous doors. I was ecstatic. They were exactly what I had imagined. We picked our favorites (there were more in the truck). 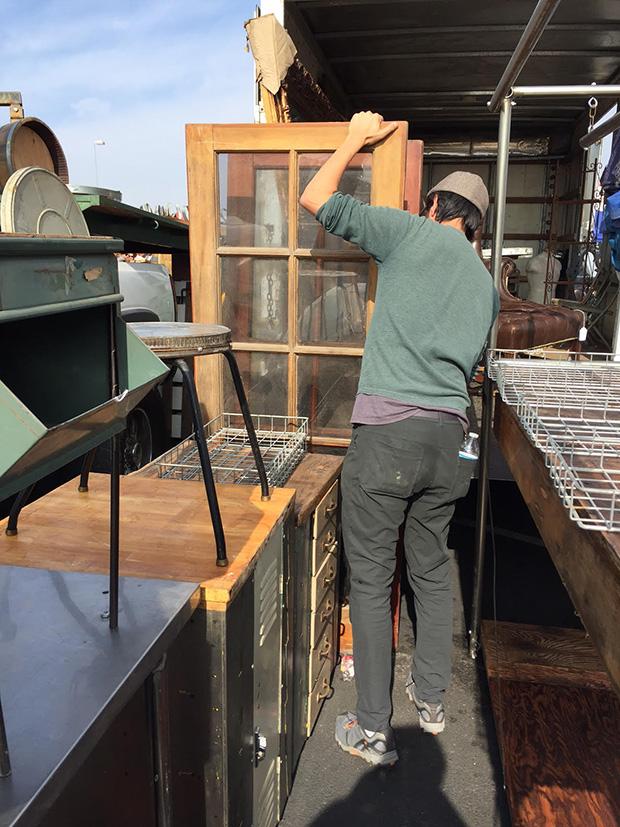 Cut to next week when our project manager rolls through. He takes a look at the doors and is like “Yes these will work, but who is gonna build the door frame?”Uh oh. He also warns us that we may not be able to pass inspection with these doors because since they are old, they aren’t up to new standards for energy efficiency. Oops.

Still determined to make these work, we head down to Treeline Woodworks, our local carpenters who made the amazing floating shelves in our boho kitchen. Turns out, making the door frame isn’t as simple as it was in my head. They have to make sure everything lines up properly, they have to built ‘lips’ so wind, dust etc. doesn’t blow in.  The estimate for making the door frame was more than $1200. But by now, I was so committed (read: stubborn) about using these old doors I didn’t care that they may not pass inspection or that instead of getting a ‘deal’ like I originally thought, we were paying way more for old doors than new doors. 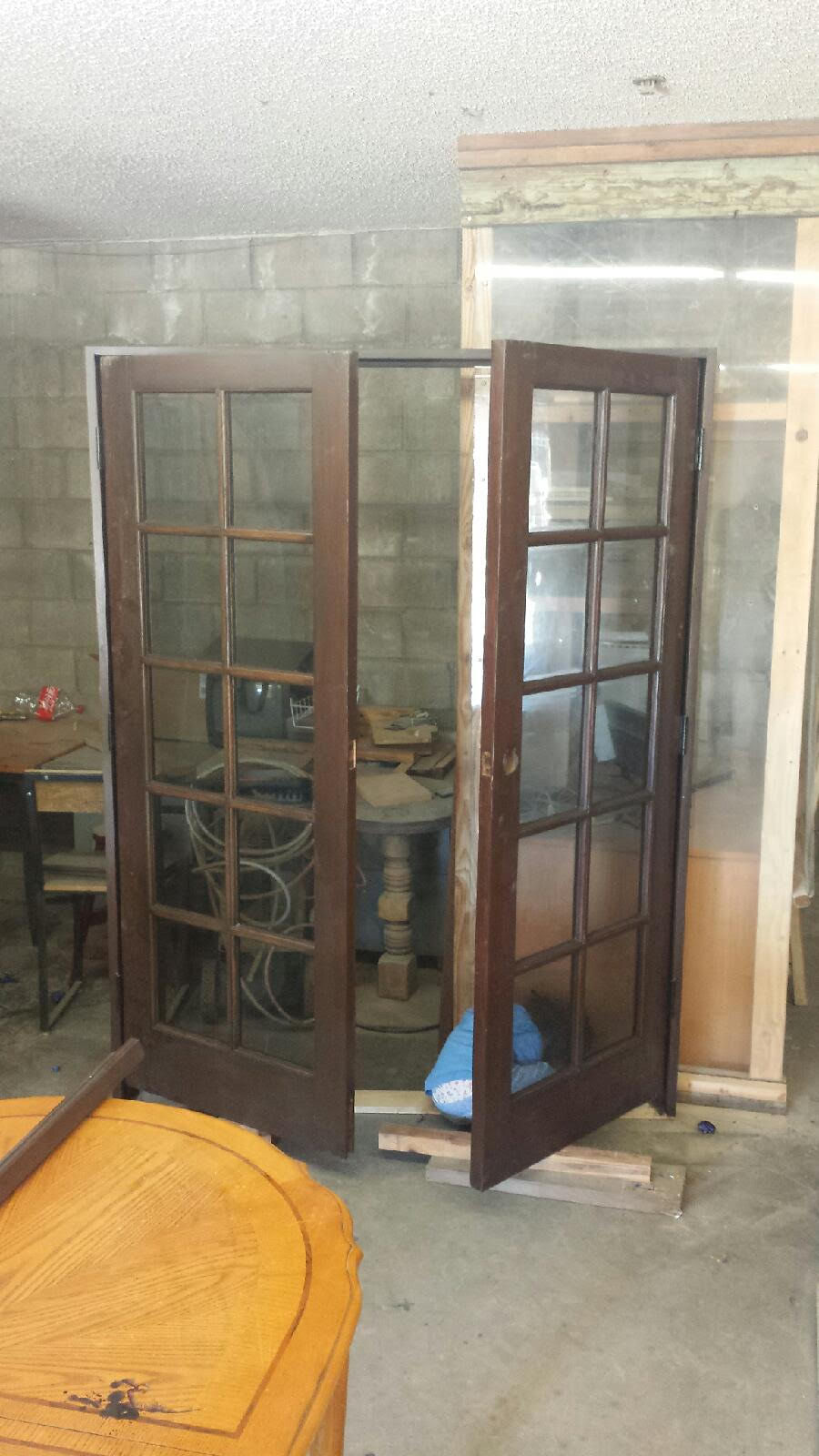 Within a week we have the door frame, only when we go to check it all out, we realize the doors are made to swing in, rather than out. Oy. So we have to have them turn the doors around. This was now becoming a real headache.

Next, finally, we get the doors home and installed. They look amazing, they really do, and I definitely learned a lot along the way. Reclaimed may be eco-friendly and beautiful, but (in this case) it was not the most practical, or most affordable choice.  So why, oh why, my friends, am I now on the hunt for reclaimed vintage hardware for our reclaimed vintage doors? The answer is, 1.) Because I’m a crazy and impractical human being and 2.) Because even after the headaches and the extra costs, I’m still kind of in love with our reclaimed French doors. Maybe it has more to do with the memories we made finding the doors all together at the market, or how much we laughed together along the way when we realized that we had absolutely no clue what we were doing when we picked out the doors. For me, remodeling our first home is as much about the process as it is about the outcome, so yes. I still love our totally impractical doors. I just hope we don’t freeze our tushies off next winter. Ha!

So, a few takeaways — if you decide to look for reclaimed doors for your place, know that they probably won’t be up to code. Try and find ones that already have the door frame, and be sure they swing in the right direction! Also, if you can find the original hardware, all the better.

Happy Friday Jungalistas! Catch you guys next week! Also, if you want more updates of the house remodel, be sure that you’re following me on Periscope for live video updates.

*Top images of doors via Chairish