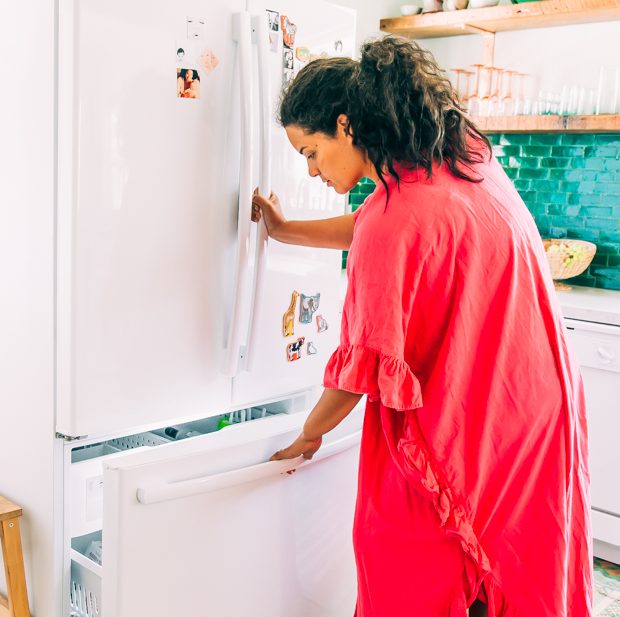 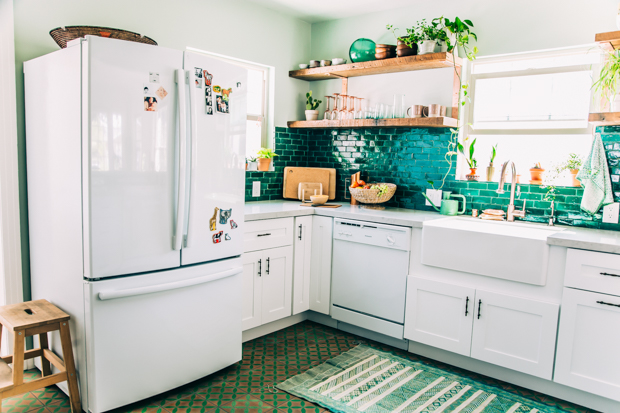 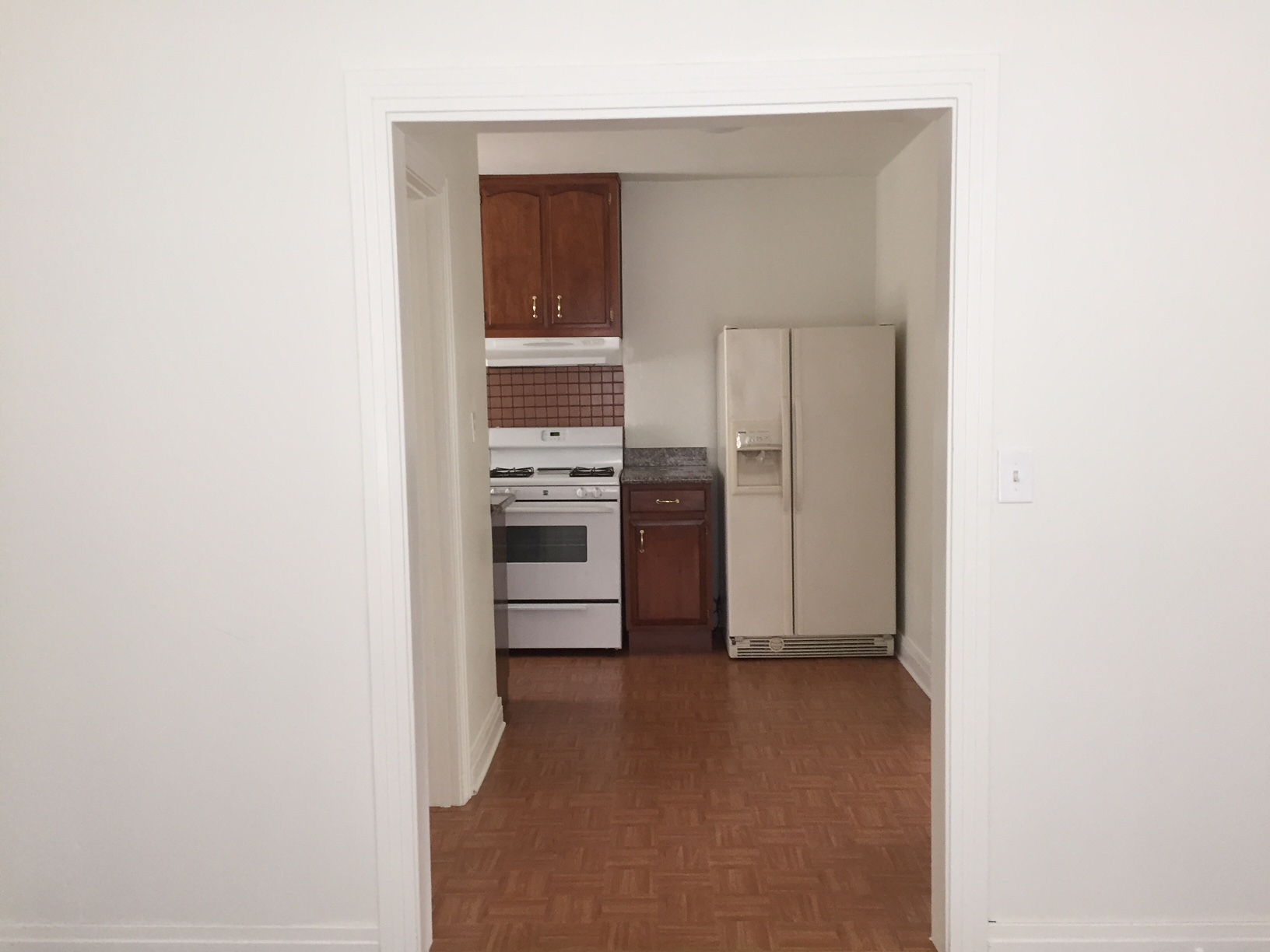 This was the refrigerator that came with the house. It’s that color that can’t decide if it’s off white or just dirty. And although the fridge is pretty functional, it’s also very old, loud, not energy efficient and let’s be honest–a bit of an eye sore.  Since the refrigerator is such a large appliance, it kind of sets the tone for the kitchen and if it doesn’t look right it can make the whole room look dated.

Jason and I spent many a night up late in bed staring at and discussing what we wanted in a new refrigerator. Not the sexiest of subjects, I know, but necessary–especially since we were already living in our new house, eating dry granola, and going out to eat most meals because we craigslisted said old, dingy refrigerator.

Of course, I had that initial inclination of wanting a retro-style refrigerator (I am, after all, a design blogger :P…)

But after a minimal amount of research, I realized (quickly) that although they are seriously adorable, they are also really expensive and not all that practical for my needs at home (especially because of the small volume). So off I went in search of that perfect refrigerator that matched my need for something functional and good looking. I my initial search I came across  several styles that I loved at GE, so in classic #BoldMoves form, I hit them up to see if they would be game to be part of the Jungalow remodel fun and they were down. Yippee!

Seems like these days, the first big choice one must make when it comes to kitchen appliances is the color. We decided on white, mostly because we knew we wanted copper accents in the kitchen and didn’t want to choose stainless for fear that it might compete with the copper accents. We also already had a white dishwasher from the former owner that we planned to keep and use ourselves, so that made the decision even easier since we wanted all of the appliances to match.

After that decision was made, we still had to narrow it down. We looked at counter depth refrigerators and bottom-freezers, hot and cold water dispensers and energy efficiency.  Then we went to Lowe’s to check out our favorite models in person. I think it’s important to check out appliances in person, to open the doors, get a feel for the amount of storage, the volume and the overall look. 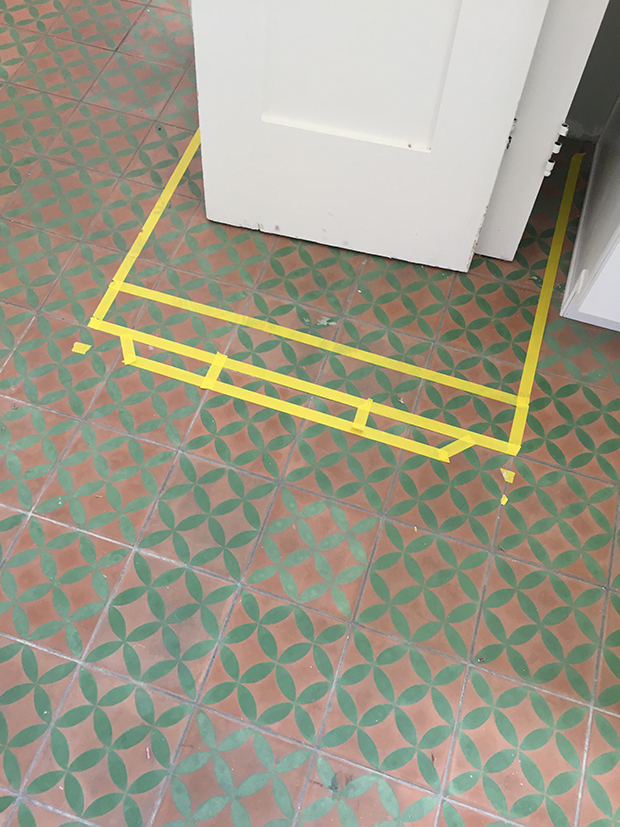 Once we picked our top three models, we went home and measured the refrigerators out on the floor with tape to get a visual of how big the refrigerator would be in the space, how far out from the counter it would protrude etc. This was really helpful in making the final choice.

And it was settled…A shiny, white refrigerator that was energy efficient, that had a bottom freezer, and French doors. We ended up ordering The GE Energy Star French Door Refrigerator*. After placing our order, the refrigerator was delivered almost immediately. I thought they might have problems getting it through our small doors, but they had this thing plugged in and ready to go in minutes. 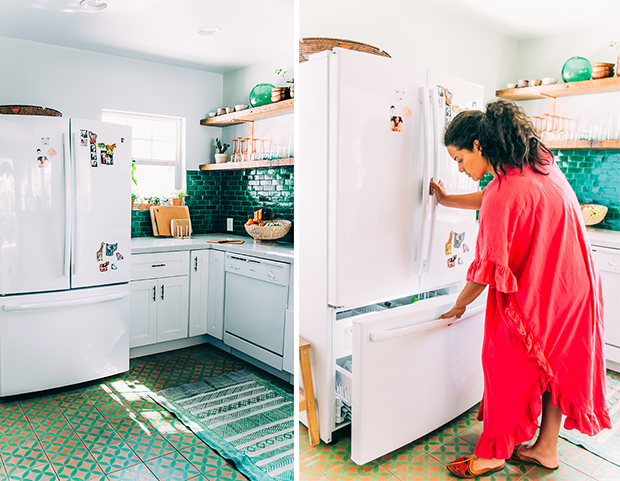 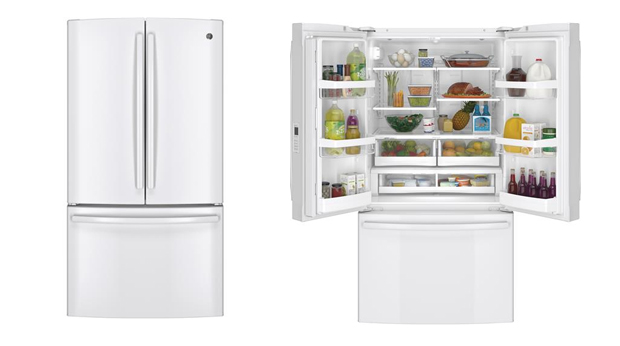 I love how simple the front is–sleek and functional. The fridge can hold so much food and is divided in such a way that it remains very organized. If we ever decide to put in a small island or something, the double doors don’t open as far as a single door so it’s a good option for a smaller kitchen. And while the refrigerator is large, the design is so minimal that I don’t feel like it steals the show in the kitchen. (If there’s one place I like a sleek and minimal design, I’d say it’s with kitchen appliances ;). And now that I’ve been eating out of this fridge for the past few weeks, I gotta a take back what I said about them a few paragraphs back–refrigerators can actually be pretty sexy. ;)

For sources for everything in our kitchen, check out this post.

Top photography by Danae Horst for The Jungalow
*This post was created in partnership with GE appliances.