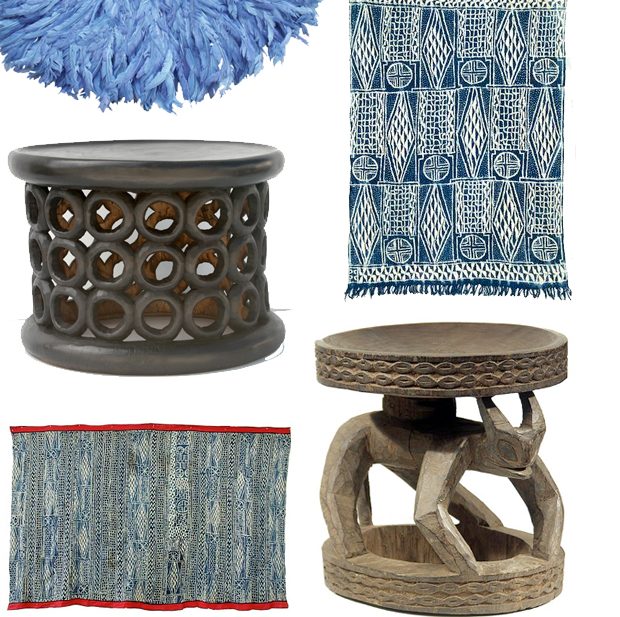 I have long since coveted both the feather Juju hats and the carved wooden stools that I knew both originated in Africa, but it wasn’t until recently that researched a bit and discovered that these things were made by the same Bamileke people of Cameroon for use in ceremonies and royal rituals.

These incredible feather headdresses are traditionally worn by the Bamileke chiefs, senior dignitaries, prominent officials and important dancers during royal court affiars.  The headdress is believed to carry with it the qualities of birds and it also symbolizes prosperity.  The stools are carved from a single tree stump and are referred to as the “king’s stools” because the most intricate ones were used as seats for tribal chiefs during public ceremonies. The criss-crosses are meant to represent the heteroscodra crassipes spider (a kind of “Old World tarantula”)–because the spider lives underground, it’s considered to be a link between this world and the world of their ancestors.

While researching the stools and the headdresses, I also came up on the most beautiful resist-dyed indigo textiles called Ndop cloth which is used both as clothing and to delineate royal ritual spaces.  The beadwork is also incredible. Like the elephant mask pictured on the bottom left, the beaded masks are worn by  chieftains and performers in regal ceremonies. Most of the costumes worn during these rituals are inspired by animals.

I would love to incorporate some (or all!) of these beautifully graphic pieces into my home.  What do you think about bringing items traditionally reserved for ceremonies into the home to use as decor? Faux pas or all good?
1 /  2 / 3 / 4/ 5 /6 /7 / 8